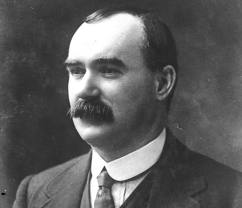 Great news that there is a campaign in Dublin to have a new bridge spanning the Liffey named after James Connolly. The James Connolly Society supports this campaign. Here in Edinburgh the JCS continue to work in support of permanent memorials to Connolly the city of his birth. We are still campaigning for a pathway in the Meadows, where he gave so many speeches, to be renamed in his honour. The JCS have also been working with others, notable the charity The Connolly Foundation, to have a statue erected in his memory in the city. Good luck and solidarity to our friends in Dublin with this brilliant idea.

Support is growing for a proposal to commemorate the struggles of 1913 and 1916 by naming a new transport bridge over the river Liffey in honour of Easter Rising leader and trade union organiser, James Connolly.

The bridge from Marlborough Street to Hawkins Street is due to open in early 2013, a year of special significance to the trade union movement as it marks the 100th anniversary of the 1913 Lock Out.

SIPTU Organiser, Brendan Carr, who is leading the James Connolly Bridge committee, said that a number of Dublin City councillors, from across the political spectrum, and public figures have indicated their strong enthusiasm for the proposal, which will be formally announced by SIPTU in the coming weeks.

“The bridge will lie within the shadow of Liberty Hall, the headquarters of the Irish Transport and General Workers Union, now SIPTU, an organisation in which Connolly played a defining role,” Brendan Carr said.

“Connolly played a crucial role in the events of 1913, when the working people of Dublin took a stand for better living and working conditions. He also personifies the link between this struggle and the later events of Easter 1916, during which he led the rebel forces.”

He added: “However Connolly must also be remembered for his importance as a thinker and a writer of seminal works on Irish history and society. He would not be out of place in the modern, cosmopolitan Dublin. Connolly was himself an immigrant. Born into grinding poverty in the Cowgate area of Edinburgh to Irish parents his legacy reaches beyond Ireland to Britain and the United States, where he also worked as a union organiser.”

Dublin City Council is expected to make a decision on the name of the new bridge, which will cater for Luas and bus traffic as well as pedestrians and cyclists, in the early autumn. SIPTU will invite a number of intentional guests to events in Liberty Hall, including a concert and exhibition, to coincide with the opening of the bridge if the James Connolly proposal is successful.

One thought on “Dublin Campaign For James Connolly Bridge”